NornickelPublic Joint Stock Company "Mining and Metallurgical Company "Norilsk Nickel” and its subsidiariesGo to the glossary and Atomflot have signed a long-term agreement for ice-breaking services. The agreement is effective until 2027 and may be extended through 2029. It underpins the strategic partnership between the two companies and affirms Nornickel’s commitment to transporting goods to the Norilsk Industrial District. 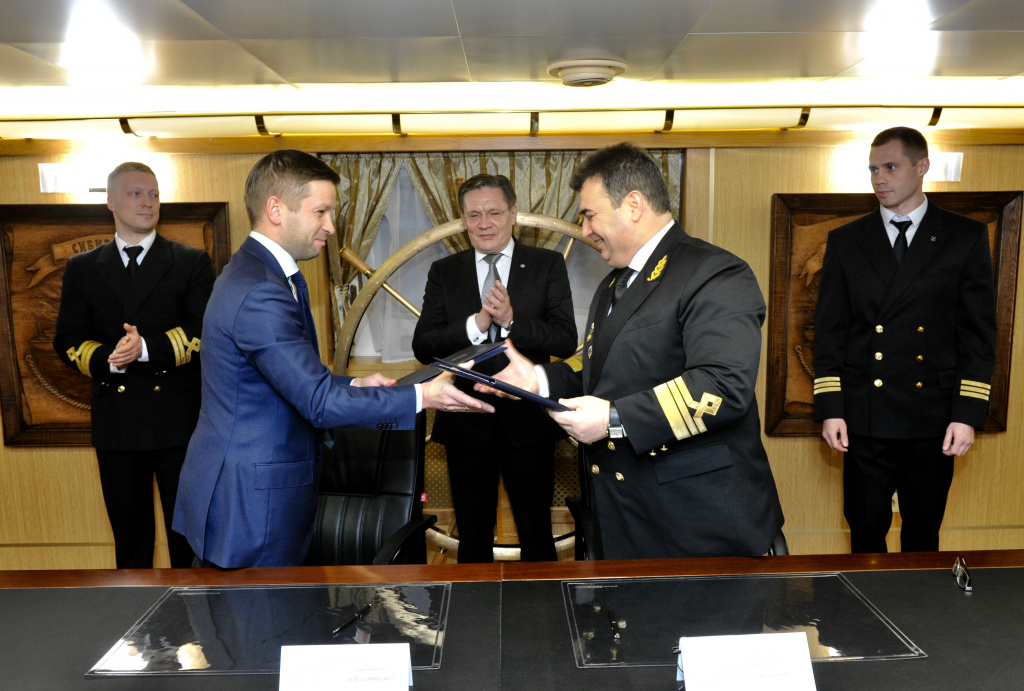 Under the document, which is an addendum to the existing 2014 agreement between the parties, Atomflot will render services to break land-fast ice and maintain navigable passages from the Yenisey Gulf to the port of Dudinka. It will also provide ice-breaker support for third-party vessels chartered by Nornickel in the area stretching from the western edge of the ice to the port of Dudinka and/or in the opposite direction (the Kara Sea, western section of the Northern Sea Route).

The addendum was signed by Atomflot CEO Mustafa Kashka and Vice President of Nornickel Dmitry Pristanskov.

“Most importantly, the document sets out the framework for our partnership over the next decade. For Nornickel and Atomflot this means fixed terms and conditions, confidence in the future and stable work,” said Mustafa Kashka as he commented on the agreement.

“For more than half a century, the nuclear-powered ice-breaker fleet has been indispensable in the Arctic. The government’s priorities for the Arctic are peaceful economic development and multilateral efforts to promote regional security. In implementing our Arctic projects, we are guided by these national goals,” commented Dmitry Pristanskov at the signing ceremony.

Nornickel is among the first and major customers of the Russian ice-breaker fleet. The first escorts for Norilsk Mining and Metallurgical Plant date back to 1960 when the famous Lenin ice-breaker came on stream. In almost 60 years, these ships have helped transport over 40 mt of goods for the CompanyPublic Joint Stock Company "Mining and Metallurgical Company "Norilsk Nickel"Go to the glossary. Today, its annual freight traffic along the Northern Sea Route is close to 1.3 mt, primarily comprising metal products, converter matte, and general cargo, including in containers.

“The company hauls freight for its own needs, while also being a key shipper of cargo to the Russian Arctic,” added Mr Pristanskov. “We expect Atomflot’s ice-breakers not only to improve navigation safety in these challenging conditions, but also to help Nornickel achieve some of its strategic and operational goals, primarily to develop the Norilsk Industrial District and increase Nornickel’s cargo traffic. This will support the exploitation of natural resources in the Arctic, among other things.”

Nornickel has its own Arctic fleet, which consists of six ARC7 reinforced ice class vessels, including five Norilsk Nickel container vessels and one Yenisey tanker. All of the ships were built in Finland and Germany. The unique design and the Azipod propulsion system allow them to sail though ice up to 1.8 m thick without ice-breaker support.

In 2010 and 2011, Nornickel’s vessels completed their first-ever independent journey all along the Northern Sea Route in a single navigation season. Crossing the route from west to east and in the opposite direction, they delivered Nornickel’s products to the ports of Southeast Asia and returned with a cargo of supplies.

Apart from transporting the Company’s cargo, the fleet plays an important role in catering to the needs of local residents, with some 110,000 tonnes of food and consumer goods shipped annually to the port of Dudinka.

Nornickel also owns several river ports, the sea port of Dudinka, and a transhipment terminal in the port of Murmansk. The ports are well-equipped to service the Company’s ships.