Nornickel, the government of the Russian Federation, Krasnoyarsk territory and Norilsk city signed a package of documents on the social and economic development of Norilsk

Moscow, February 20, 2021 — NornickelPublic Joint Stock Company "Mining and Metallurgical Company "Norilsk Nickel” and its subsidiariesGo to the glossary, the world’s largest producer of palladium and high-grade nickel and a major producer of platinum and copper, announces that the government of the Russian Federation, the Krasnoyarsk Territory, Norilsk city and Nornickel have today signed a set of agreements to promote the social and economic development of Norilsk. 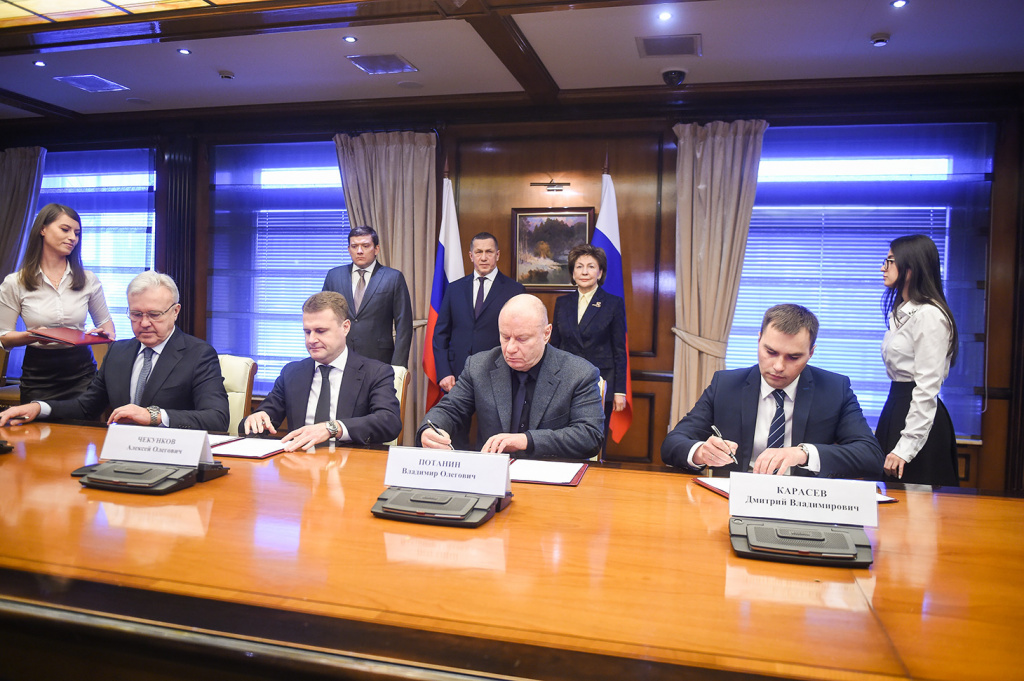 The documents were signed by Alexei Chekunkov, Minister for the Development of the Russian Far East and Arctic; Alexander Uss, Governor of the Krasnoyarsk Territory, Dmitry Karasev Mayor of Norilsk and Vladimir Potanin, President of Nornickel.

The first document is a four-party partnership agreement, which outlines the combined work of the parties until 2024 and further potential collaboration until 2035. The document details key projects for the development of Norilsk. The federal centre, the region, the city and Nornickel will jointly work on the following projects:

— housing renovation, modernisation and an overhaul of the city’s municipal assets and engineering infrastructure;

— resettlement of residents in Norilsk and Dudinka living in buildings requiring renovation to areas with more favourable living conditions.

The second document signed today sets out a joint proposal for the Comprehensive Plan of Social and Economic Development of Norilsk until 2035.

“The agreement is vital for the entire Norilsk. Work has to be done to put the city’s infrastructure in order, to improve people’s living conditions. We consider the signed agreement to be a starting point. We have a lot of work to do with the company to ensure that the agreement improves people’s lives in the near future. We will discuss it with the company and take measures to raise the requirements for industrial safety: people should not get killed at an economically successful enterprise. It is necessary to improve people’s living conditions faster: we need to invest money from the state budget and from the company. The company should bear its social responsibility already now,” said Yury Trutnev.

Commenting on the signed agreements, Alexei Chekunov, Russia’s Minister for the Development of the Far East and the Arctic, noted that the integrated development programme for Norilsk, based on the principles of public-private partnership, was an important step towards improving the quality of life in Arctic cities. “The signed agreement is a comprehensive, long-term view of the social and economic development of one of the key cities of the Russian north. Every activity will be put into a specialized electronic database. This will allow us to monitor the step-by-step implementation, so that the allocated funds benefit the residents of Norilsk”, he said.

Vladimir Potanin, President of Nornickel, commented: “This is not the first four-party agreement around development of Norilsk. Nornickel has already successfully fulfilled the agreement signed in 2010 by implementing a wide range of activities outlined in the document. I am confident that the implementation of new activities will turn Norilsk into a more modern and comfortable place to live, giving a new impetus to the development the city, and also the whole Krasnoyarsk Territory.”

Krasnoyarsk Territory Governor Alexander Uss said that the agreement signed today by the region, the Ministry for the Development of the Russian Far East, Nornickel and the administration of Norilsk will give Norilsk residents the living conditions they deserve. “Norilsk is a city of our common responsibility. What we have agreed upon today is a starting point for the joint solution of the top-priority problems mentioned by the residents of Norilsk themselves — environment protection, public utilities and the condition of homes. I would like to note that we will continue to work on the comprehensive plan for the social and economic development of the city for the next 15 years. Our common goal is to make Norilsk the capital of the Russian Arctic by 2035, or possibly earlier”.

Dmitry Karasev, Mayor of Norilsk, noted that all residents of Norilsk have been looking forward to signing of the documents, and have high hopes for the implementation of the activities outlined in the agreement.

Dmitry Karasev added: “The signed agreement is key to successful development of Norilsk and its promising future. The main task is, undoubtedly, to raise the living standards of Norilsk residents. This agreement will give a new life to the city. We have years of productive work ahead of us. Implementation of the activities of the Comprehensive Plan will become an excellent example of public-private partnerships, to implement the tasks outlined in the Decree of the President of Russian Federation ‘Regarding the Foundations of State Policy of the Russian Federation in the Arctic in the Period to 2035’.”